Monday Mantra: Selfish is the new self care.

There's no denying that millennials have turned up on the self-care craze. Companies are literally creating and marketing products called “sunday” products to play into this whole self care theme we've all be obsessing over. We've all probably heard the phrase, “self is the new self care” by now. But what does it mean?

What does “Selfish is the new self care” mean?

I'd encourage you to write down exactly what “selfish is the new self care” means to you. For me, it means I cancel plans to spend time with me! Yes, that means people think I don't like them. But the truth is, I really enjoy my own company. It's taken until I've been about 30 years old to get comfortable with that idea.

What “selfish is the new self care” is not…

For years I forced myself into social settings because I worried that people would think something was wrong with me if I didn't have a gang of friends around. Like it was confirmation that I was too much of a strong personality for people to be around, like I was too much drama or too much to handle. Or that I really wasn't good enough, fun enough, nice enough, or fill in the blank. I constantly beat myself up and forced myself to go out even when I didn't want to because I didn't want people to think I was weird or unlikable.

But guessed what would happen? I'd force myself to go out and then I'd be totally miserable. Constantly checking my watch for when I could go home, making bad jokes because my insecurities were running rampant, and the exact situation I was trying to avoid – having people think I was unlikeable – would end up happening.

We're allowed to be selfish

As a recovering people pleaser, it's taken a lot of strengthen and changing beliefs to get okay with being selfish. To own my selfishness. I remember about two years ago, I met Shaman Durek for the first time (he was on episodes 14 and 15 of the podcast), and he told me that I was here to be selfish. WHAT A CONCEPT!

Ever since I was a little girl, my parents would spit the word “selfish” at me like a dirty curse word. Like I needed to be ashamed of my selfishness. When I spoke with Jenna Zoe about Human Design in episode 12 of the podcast, she explained that as a manifesting generator, it's my job to get excited and just do whatever I want and tell people that's what I'm doing. If they choose to join, great, if they choose not too, that's cool too. Between Shaman and Jenna Zoe's words, I finally started to get comfortable and truly understand what selfish is the new self care meant for me.

Selfish self care looks different for us all

It didn't mean that I would set aside Sunday night for a bubble bath a week in advance. Instead, it looks like me canceling plans at the last minute because I'm just not feeling it, even if that's going to annoy someone. It means that I ask to eat outside, even when in a large group of people without checking on them because it allows me to feel more grounded and free. I don't apologize for having my own likes, wants, and desires – especially if they don't fit into someone else's perception.

Yes, that's meant that over the past couple of years I've gotten my fair share of, “wow, Rachel is oddly passionate about eating outside” and “Why is Rachel being so stand offish” as I leave everyone sitting on the beach to dive into the ocean without a care if it's “polite.”

While I was pregnant, E and I talked extensively about the word selfish. Why did it get a bad rep? How come it's so triggering for people? Here's what we came up with: selfish is a neutral word. Somewhere along the way, we as people decided to give it a negative connotation. Meaning, it's not negative, but we've assigned it a negative value.

Definition of selfish according to Merriam-Webster

1: concerned excessively or exclusively with oneself : seeking or concentrating on one’s own advantage, pleasure, or well-being without regard for others
2: arising from concern with one’s own welfare or advantage in disregard of others

“Without regard for others…” that's not necessarily a bad thing.

It's no secret that I've had a strained relationship with my mother in the past. Last year, after telling her I was pregnant, I agreed to go to brunch with her, her husband, my in-laws, and my husband to celebrate my husband and mother's birthdays. I knew I wasn't ready to be around her yet, but I pushed my concern for my own welfare aside and put everyone's else's wants above my own. Only, once I got there, my energy was all off. I'm not a good faker. People know exactly where they stand with me.

So when she'd ask me questions I wasn't interested in, I'd respond with one word answers to the best of my ability. Ultimately, she left the meal multiple times to cry into the bathroom over my coldness. We left early and apparently her husband threw the plates and cutlery on the ground while screaming about what a b*tch I was.

So I ask you, in that situation, was it better to be selfless and do what everyone wanted? Or be selfish and cancel at the last minute and disappoint or upset everyone for what seems like my own advantageous welfare?

Sometimes, we really don't know what can happen when we push ourselves to please others. Things can go horribly south and make the situation even worse like in my birthday brunch example. While people may not always like or agree with my selfish ways, they also forget that if I did what they wanted, it could turn out even more damaging. 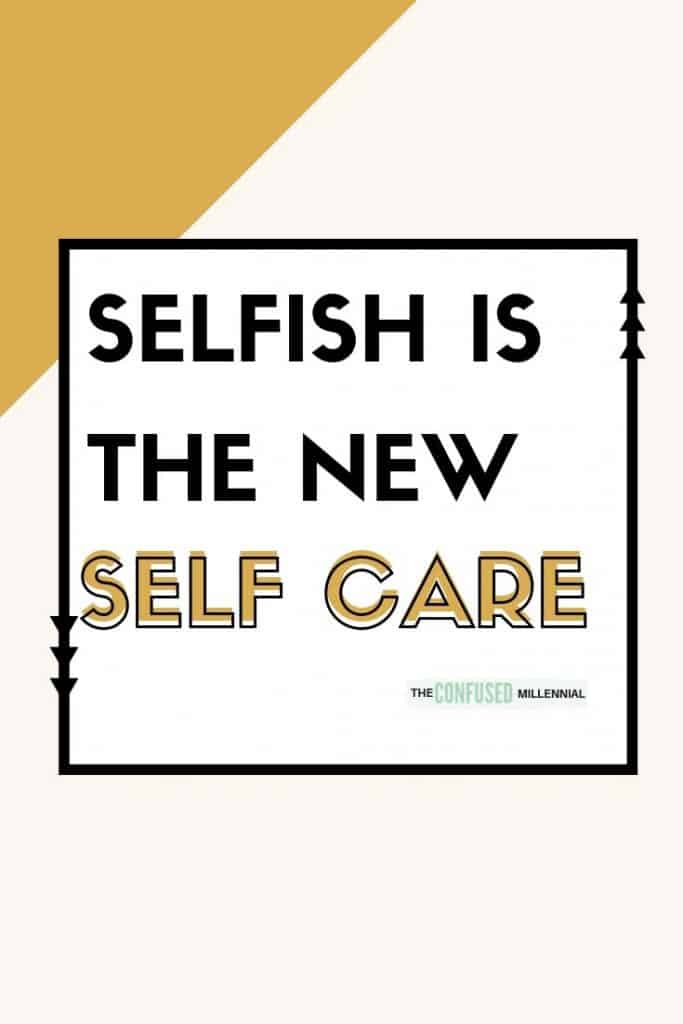 Give yourself permission to be selfish

Here's my permission slip to you – not that you need it, but in case you need to hear it – Selfish isn't a dirty word. Selfish is to be celebrated. We don't know how things will turn out if we choose the seemingly “selfless” option. Allow selfish to become synonymous with self-care in your vocabulary.

Lastly, remember, if people think you don't like them, that says more about where they are at than you. It's not your job to convince people you like them. It's their job to know their worth and know it doesn't matter if you like them or not. You are not here to make anyone happy or comfortable, that's an inside job. You can't fill anyone else's cup up if they can't fill their own and you can't fill yours. Yes, it's important to care about others and lend a shoulder or hand when you can, but there's a reason you have to put hte life mask on yourself first on an airplane before others.

How To Have The Ultimate Self-Care Staycation [5 Steps + 15 Suggestions]
Monday Mantra: Rejection Is Just Redirection