Probably one of the most FAQ I've gotten lately: How did you prepare for labor? At first, I honestly didn't think or feel like I did anything. And then after giving birth to our daughter, I had a lot of people tell me I did a lot to prepare for labor and did “so many of the right things” (whatever that means ?). But it did get me thinking, I manifested exactly what I wanted in a birth (read my birth plan here). Down to the fact that from the time I entered labor and delivery to holding her in my arms was under 2 hours – Back story: I had a running joke with my neighbor who had her daughter in 2 hours at the hospital that I'd beat her!

Anyway, all the questions and comments really got me thinking about what I did to prepare for labor and when I asked y'all on my Insta-story if you were interested in a little post about it, the response was overwhelmingly “YES!” So here are the traditional and non-traditional ways I prepared for baby's arrival!

List of 12 Things I Did To Prepare For Labor

This was the first thing I did. My original OB actually delivered me. However, once I got pregnant I quickly realized it was not the practice for me. I met with several midwives and talked with loads of people before deciding on my primary care provider. I was so nervous to make the switch but am SO happy I did. I felt supported all the way through my pregnancy and knew that my birth team understood and supported my vision.

[RELATED] What To Wear After Giving Birth In Hospital

This is a biggie!! I've mentioned it a ton on the blog, but seriously, it saved me while pregnant! I used to struggle with chronic headaches for over the last 5 years (we are talking headaches lasting for seven or more hours a day at least six days a week!). Once I got pregnant, I didn't want to be taking Tylenol every day and couldn't use tiger balm, so I was exhausted more from my headaches than from pregnancy initially. Very early on in my pregnancy I began seeing a chiropractor who specializes in babies and pregnancy and my life changed!

Within a month I was down to maybe a 20 minute headache each week. I had been burned by so many chiropractors over the years, that I was skeptical, but let me tell you it's worth finding a prenatal chiropractor! He also adjusted me while I was in labor and made sure everything was in alignment for baby girl's trip down the birth canal! Both baby and I get adjusted now and it's a big reason I think she's so calm, but that's probably an entirely different post (let me know if you want to hear about it in the comments!).

So I wasn't surprised when he cleared as much as he did when I was pregnant. I found myself truly becoming excited to about our daughter at that time. It was a chance to let go of any other fears I was holding onto. Then when baby girl was taking her sweet time to come out, the hubs texted Shaman to ask if there was anything we could do and if everything was okay. Shaman told me to lay down, put my hands on my right side, and send loving energy to the baby signaling I was ready. I cried and cried during this and went into labor that night.

RELATED: 014: Ancient Wisdom for the Modern Millennial with Shaman Durek

Ohh this was a BIG one! Okay, so Psych-K is basically like doing years of therapy in minutes. It taps into your subconscious mind and re-writes your conditioning. So, even though I did hypnobirthing and consciously believed I was capable of having that type of birth, there was still subconscious programming that wouldn't fully let me believe it/live it so I worked with a Psych-K facilitator extensively to reprogram all my thoughts around childbirth. Also the morning that Shaman told me to send emotional signals that I'm ready to the baby, I also had Natalie go into my subconscious and do a balances for “I'm ready to give birth and I'm ready to become a mom.”

Obviously these are an important part of any pregnancy! I decided to take these ones, you take them three times a day which is a bit much to remember, but after doing a lot of research they seemed like the best option for me. I also had a back up once daily prenatal on hand to take on days I forgot my others. Lastly, I took these fish oil supplements.

This helped me so much! Both in allowing me to feel great during pregnancy, but also feel strong and capable when it came to giving birth. I truly believe labor is a marathon, and you wouldn't show up to run 26+ miles without some prep right? Nope! So consider this the same.

Here are my work out tips for pregnancy.

Hypnobirthing at The Orchid Nest

I didn't take any labor or baby prep classes other than this one and highly recommend! I remember leaving the first class at The Orchid Nest and feeling invincible! Like my body was made for this. In the class we learned a lot about how animals give birth and how humans have essentially been conditioned for centuries to fear childbirth and how we can undo that conditioning to move back towards giving birth in more similar ways to the animals – undisturbed and at our own pace. Hypnobirthing is really special; you aren't being “hypnotized” like the name would imply.

Essentially you're teaching your body and mind to go into a deep meditative state and by allowing the mind and body to relax everything can loosen up and happen without interventions at the pace that makes sense for your body and baby. Because my labor was so quick, I didn't really get to go into my deep trance like state like I had envisioned, but I felt confident in my ability to breathe the baby down and out (which is what they teach you over “pushing”) and in the sense that I could do this after watching so many other births like this in the class. Too often, the only thing we see is the dramatization of labor on TV, so it was great seeing really families going through labor using this method to replace the fear-based drama you see on TV.

With hypnobirthing came a lot of meditating. Both by listening to the audios, but also in my own way. If you read this post on meditating, you know that I believe meditating is more than emptying your mind and sitting still. It's walking, it's talking, it's anything that brings you to a deep state of focus and relaxation. So with that, I walked every day while pregnant. I'd get to the beach and commune with nature as much as possible. I'd release my fears and thoughts as they came up – both about delivery and just having a baby in general.

RELATED: The Beginner’s Guide To Meditation: 5 Tips To Get You Started

I had scheduled a labor induction massage the day before I went into labor. We decided to go forward with the massage even though I was in labor since it helps move things along. Also, laboring while getting a 90 minute massage feels amazing versus just sitting there timing your contractions and thinking about them. It was a great distraction and relief to not have to stare at numbers. I went from having contractions every 5-10 min at the start of it to every 3-5 minutes by the end of it. Clearly in 90 minutes it helped move things along!

Hiring a doula was literally one of the best decisions we made! I really struggled with our doula decision, which is odd for me since I'm normally a very decisive person. We attended a “meet the doula” night at The Orchid Nest in Delray Beach, FL and I really liked two of them.

One seemed very grounded and calm. Kind of like a tranquil earth goddess you'd want by your side in birth. The also felt very grounded, but more like me in the sense she had a tonnn of energy. She  was SO warm and loving too. The latter with all the energy had a ton of experience and I had friends who had used her and all loved her. But I was so nervous: would all of her energy AND mine be too much in a L&D room?! Did I need something more tranquil?

I debated for weeks, almost went with an entirely different doula at one point, but I could never get the energetic doula's hug out of my mind. It was SO warm and felt unconditionally nurturing. So finally like a month before I was due, I made the switch to her, who of course was out of town for a bunch of days the month I was due. But they say whoever is supposed to be at your birth is, and she was there! My husband was infinitely grateful to have her there as well. You can read more about how she helped on the big day in our birth story here.

I put this here even though it was unexpectedly part of my prep for baby. You see, I had the fabulous Danielle Paige come over to record for the podcast (listen here). I had just found out I was pregnant a few weeks earlier and wasn't really feeling myself and wanted to let her know why I was a little off. We spent a lot of time talking about the pregnancy and my chart off-air and kind of touched around it in the episodes (since I hadn't announced it yet we were pretty cryptic). The big thing that came from it though was this sense of calm. Like I wasn't crazy for having the feelings I was feeling. That I actually came here in this life for family, and this baby was my “freedom baby” as she called it. I remember just crying and feeling so calm and at peace about this journey I found myself on.

I believe it was around my last month of pregnancy that someone reached out to offer a reiki session to me. I was having a really rough day and was like “YES!!!” When we sat down for it, I felt so much dense energy and was really struggling. We were in the midst of buying the house, I was wondering if baby girl would ever make her debut, and I was freaking out about family dynamics. I had never done distance reiki before so was unsure how it would go. It went great and I felt so much lighter the next day. Things were shifting!

9 Tips & Things To Remember For Surviving The Fourth Trimester

What The First Month With A Newborn Is Really Like

Pregnancy Checklist: 21 Things To Do In The Third Trimester 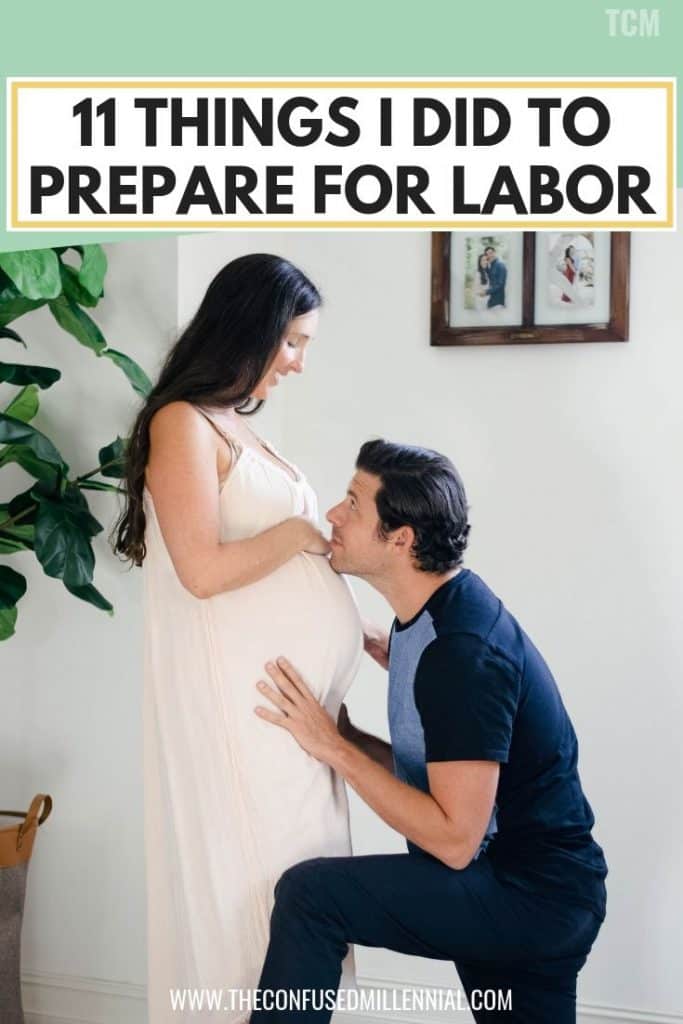 List of 12 Things I Did To Prepare For Labor