Ahh it feels so exciting to finally write those words. Honestly, I've wanted to tell you guys for months, but we had to wait until we told family first – and we were totally holding off on that for as long as possible. It's definitely been a tough secret to keep from you guys. I wanted to scream it from the roof tops, but instead had to sit quietly. And as someone who generally writes about what I'm going through, it led to a total loss of motivation to create content since I couldn't share it! I was also unbelievably tired the first trimester and didn't want to do anything (hence not being present on Insta-stories and as you may have heard on this episode of the podcast, was even considering stopping that!)

Speaking of the podcast, if you want to listen to our pregnancy journey you can here!

We also answer a lot more questions and share more detail in the podcast episode! 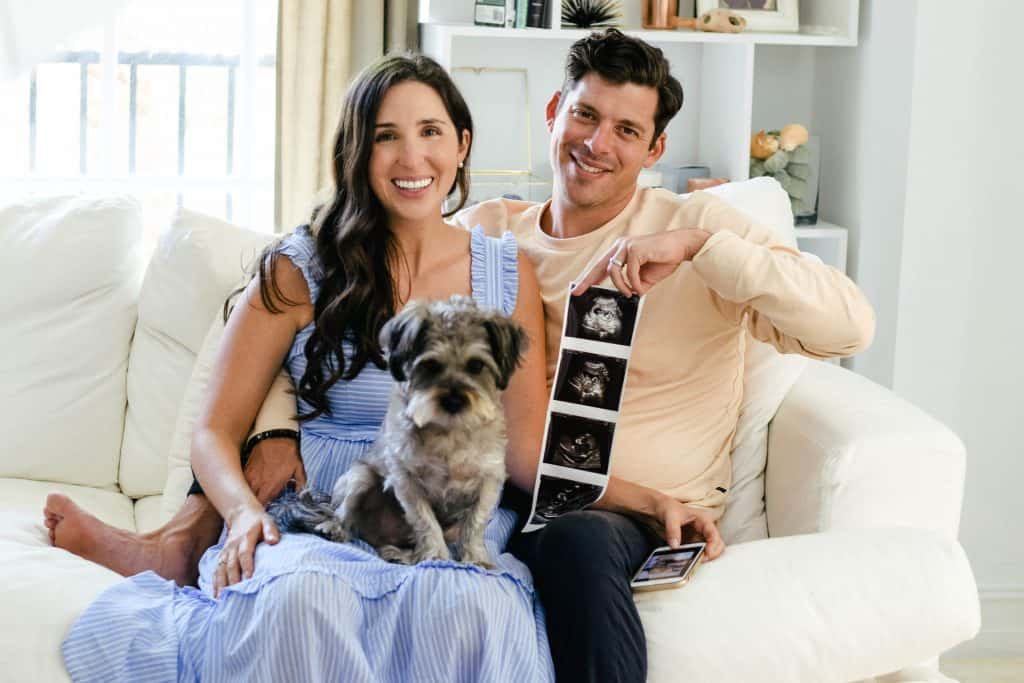 We weren't not trying. I went off birth control quite reluctantly in October 2017. I had a friend who got pregnant on birth control so I waited as long as I felt comfortable to go off, because I knew it was a total possibility to get pregnant right away. Anyway, if you caught a couple of my past blog posts, you know I had a lot of fears around both pregnancy and having kids. I totally want to be a mom and have always believed I'd become a mom some day – but for some reason these last few years I've had this big resistance to it.

In October I went off birth control, and then E and I got baby fever for like a month in December and straight up tried for a week around my ovulation time – only it felt totally awful and weird and I felt like I was going to have a panic attack every time. It gave me so much anxiety and I was not into it at all. In January I met with Shaman Durek for the first time and had no plans of talking about starting a family when he asked, “Kids?” and I said, “what about them?” he said, “do you want them?” and I said, “yes.” To which he told me that there was a block in my uterus preventing my from getting pregnant. That there was something inside of me that was afraid of having kids because I felt like I needed to be more successful in my career and I had a horrible fear of directly impacting another life (both very true). I said “okay” and that was kind of the end of that.

Afterwards I told E and we both agreed to stop trying and just let the Universe take over and let things unfold in time. I knew the fears would clear on their own and oddly felt a sense of comfort that I didn't need to “try” anymore. Truthfully at that point, it felt like I was “trying” to try because everyone around me was constantly asking about kids, I knew E really wanted them, and well, I'm getting older.

How we found out

… until May and I miss my period. I honestly didn't think anything of it though. I was under a lot of stress and was experiencing suicidal thoughts for the first time in almost a decade and was deeply just all over the place. My life was crazy at the time too, I was supposed to go to NOLA (find out why we didn't here – it's a good story I promise!) – and then had Shaman Durek and his niece staying with us for a couple of weeks that month which was a TOTAL whirlwind (more on that here, and even more to come on the podcast in the future!).

Anyway, I knew my period was like 6 weeks late, and honestly just chalked it up to stress, changes in my diet (I had just transitioned to being vegan for the last month), and truly believed that Shaman had reset my menstrual cycle to cycle with the full moon during one of our healing sessions. Pregnancy was the last thing on my mind.

After Shaman left I slept for a week straight and had zero motivation. Again, I thought it was totally normal – I had just gone through some really intense healing sessions, had a ton of people in my house, and needed to recover.

But then my boobs hurt. Like REALY f'in hurt.

Now I'm like 7 weeks late for my period and one of my friends who is psychic texted me that she had a vision I was pregnant. I laughed and ignored it but told E who said, “I think you are too, do you want me to get a test?” I responded, “Ugh no, it's probably nothing, the full moon is in a few days and if I don't get my period then I'll get a test.” Mind you – I spent the last week doing a liver detox and had just gotten a colonic.

…only the day after my colonic things didn't feel right. My bloat didn't go down, my boobs were hurting even more, and I finally said to E, “I can't wait 2 days, go get the test, I know I'm pregnant.” He came back with it and it said it'd take 3 minutes for the second line to appear if I was pregnant… I peed on the stick and 10 seconds later it was hot pink with 2 lines… Well damn, I'm clearly very pregnant.

We called the doctor the next day and found ourselves in our first ultrasound listening to the babies heart beat and seeing the little dot on the ultrasound screen 4 days later.

Okay truth, after I took the pregnancy test, I started hysterically crying. Not like “OMG I'm SO excited” crying – but like “WTF is happening in my life?!?” crying. Tucker immediately started barking and freaking out with my over the top reaction. I told him what was happening and he'd be a big brother. Since then, I'm convinced he knows what's up. He has become SO much more protective of me on walks and constantly lays with his head on my belly. He's a super sensitive dog so it really only makes sense the he smells something is going on even if he has no idea what that is lol 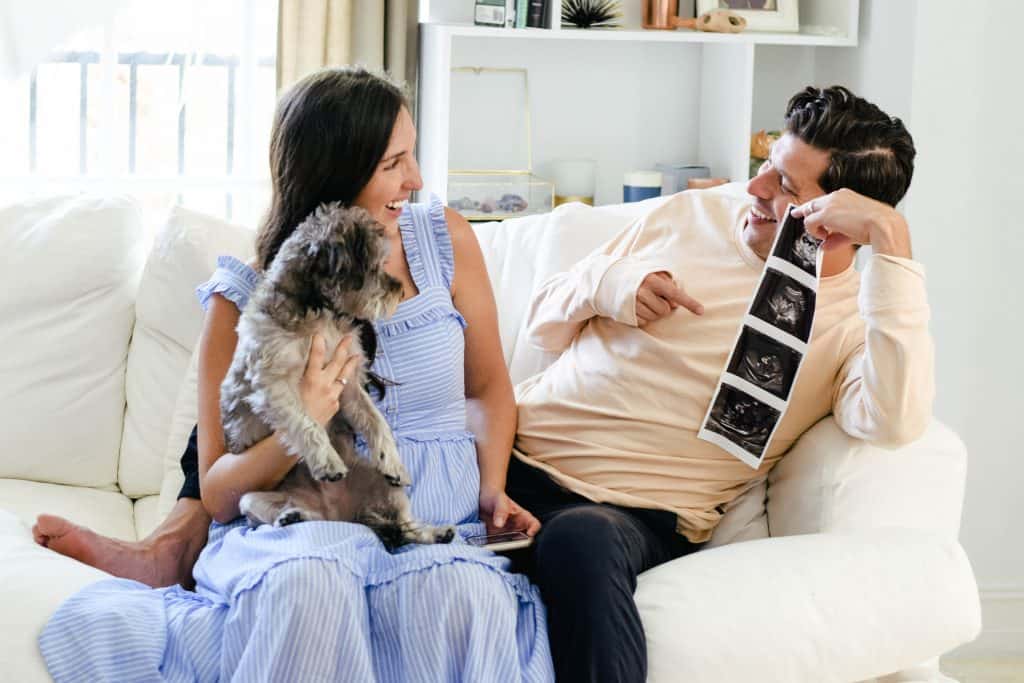 The biggest surprise for me in pregnancy so far…

Has been the total switch I've felt. I was so afraid of becoming a “mommy blogger” for so long. I watched friends who were once totally independent women with full and interesting lives, now only able to talk to me about a conversation a random 4 year old was having with their 2 year old and felt totally perplexed. Honestly, I was so scared to have kids because it seemed like every person I saw make that transition totally lost themselves in it and I was terrified the same thing would happen to me.

Until about a week after I found out.

You see, my entire life I've been told that I'm here to be a mother. I've always had an insane amount of children around me both in the physical and in the spiritual world. I walk into a reiki circle and the reiki master immediately says, “there's just children alllll around you.” I've always known I was meant to be a mom in this life. I was talking to Shaman about the above paragraph I just wrote (my fears) and he laughed and basically told me that it wasn't possible for me to maintain who I am with kids. That I was going to be so involved as a mother that I was going to lose myself but not in a bad way. And it finally just clicked for me – I'd been denying a part of myself I've known to be true since I was a little girl and I didn't really care that I'd “lose” myself, because in truth, it'd mean I was finding myself.

I didn't really care that I'd 'lose' myself, because in truth, it'd mean I was finding myself.Click To Tweet

A few weeks later I did my astrological reading with Danielle Paige which you can listen to her episodes on the podcasts here and here. She told me that I've been a boss for many lifetimes, and that I'll still be a boss and have my career in this life, but I'm really here for family. Which I've always known on a deep cellular level. As much as I love kids, I think my fear came from the fact that I've always known this was my path, and it's just such a big change into the unknown that it scared me and LBH, the relationship with my mom and watching her relationship with her mom isn't the most comforting model to work off of. 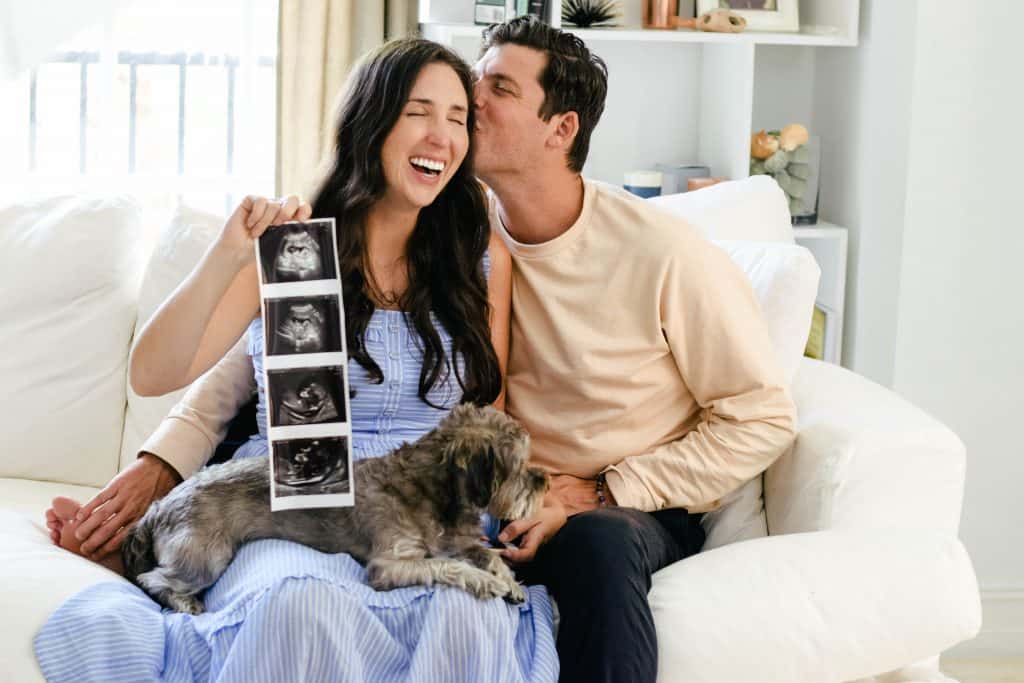 So if you skipped all my rambling and just skimmed down to here:

The biggest surprise for me about being pregnant, has been this switch that flipped inside of me where it's all I think about and want to put my energy towards.

So am I going to become a mommy blogger? Probably not – fully. Listen, I've always written this blog based on what I'm going through and passionate about. When I launched this blog I had gone through a bunch of career stuff and my content was more career heavy – that content slowed down as I've been further and further removed from the 9-5 life. I went through a phase where I wrote more about blogging because it's what I obsessed over my first year. But I've always strived to have a well rounded balance of content from career, entrepreneurship, finance, to home, entertainment, and whatever else is going on or coming up. So without a doubt, I'm going to have a lot more “mom” content, but as always I'll strive to do it in a relatable way. It won't be the only thing I write about by any means, but yes, it's going to be a part of me so it'll be a part of this blog.

Working on a first trimester post next, so drop me any questions you'd like to see answered in future posts below!!

If you want to hear more about our pregnancy journey, where we are at with our birth plan and everything, make sure to check out E and I on this week's podcast episode: We also answer a lot more questions and share more detail in the podcast episode!

9 Fears About Pregnancy + Why It’s Okay

What Happens To Your Body When You Go Off Birth Control?

Millennials, This Is What You Need To Understand About Healthcare