Should you facebook stalk your crush? What happens when you run into them around town…on purpose? Here's the story of how I met my husband. It's not your conventional love story, but it's funny (and possibly cringey) one!

Not into reading? You can listen to our story:

I remember the first time I met my fiancé… It was an October night in Florida, I was 22 years old, and had just finished my waitressing shift, changed in the bathroom, and headed over to a friends pool party. I remember not knowing a lot of people there, and kind of just sitting on the sidelines watching. We maybe said one word to each other, if that, and I forgot about him the next day.

Then a few weeks later I was *hate browsing (*hate-browsing: when you’re over something, but stalking it anyway) J-date with an anonymous profile (*like seriously, this entire thing was made up, and I still use it occasionally to help friends stalk*), just seeing who was out there, but didn't actually want to deal with talking to anyone or filling out a profile… When I saw him!

I remember clicking his picture and thinking “OMG WHO IS HE?? I WANT TO MEET HIM!” Full on sleuth mode kicked in and took the party over to Facebook, where I eventually found him and realized I’ve met him before! Not only had I met him about a month prior, I also knew his roommate and slept in his neighborhood 3 nights a week (side note: My mom had just sold our house and moved us in with my grandma at the time and I couldn’t get to class without a car (which I didn’t have), so I stayed at a friends house near campus the nights before class #millenniallife).

I digress… I found myself thinking:

“Okay Rachel, HOW ARE YOU GOING TO ACTUALLY MEET HIM? Without seeming like a total stalker.”

I decided to ask his roommate to hang out, hoping he would be there… but he wasn’t. GRR ?.

A week later I stopped by his place to return something to his roommate, as I got closer I saw them outside on the driveway talking, and literally skipped over (*well there goes all my cool…*). To this day he teases me for the events that unfolded that night:

B)     That item I was returning? A pair of socks I had borrowed, which I washed, folded, and tied together with a little green ribbon.

C)     He was talking about his encounter with a psychic earlier that day (who said somebody was in love with him and he didn’t know it yet *ANOTHER SIGN?!?*) To which I proceeded to tell him how I believed my dad used black magic to get my mom and I back after they broke up and I believe that’s what killed him so young…. (*Well this just got weird…*)

D)    And then to really mess the entire night up, I reverted back to a full on schoolgirl by picking on him.

I totally blew it.

I tried wayyyy to hard and was not myself. He will even tell you that after that night he thought I was cute, but weird AF.

I spent the next few weeks, Facebook location stalking (FYI the Facebook app has this super fun feature, where you can see nearby friends), him and his friends every night when my waitressing shift finished. If I saw they were close, I would do a walk by… finally one night I saw he was down the street at a nearby restaurant, so I walked by and he was at one of the sidewalk tables with a bunch of mutual friends. I was giving my friend a hug when he tried to say “hi” to me, and I totally blew him off, giving him a “who are you?” look. 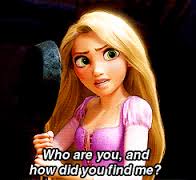 “WHY would you do that after going through so much trouble to “run into” him?” you might be wondering at this point…

You see in my mind, he was SO out of my league. He’s ridiculously handsome, every person I asked about him said he was literally the nicest guy ever, and I thought there would be no way he was interested in me. I refused to believe someone so good looking wasn’t a player, so I decided to knock him off his pedestal (even though he wasn’t on one).

Then a few weeks later I was walking down that same street when I ran into him and his roommate (this was the actual universe, not my stalking), and I went to introduce myself to him… when I “quickly put the pieces together and “remembered” who he was” (<— you see what I did there??) from the week before… I told him I would friend him on Facebook that night, and then… the next moment was EPIC: I put my hands on his shoulders and looked him square in the eye and said “I will never forget your face”. 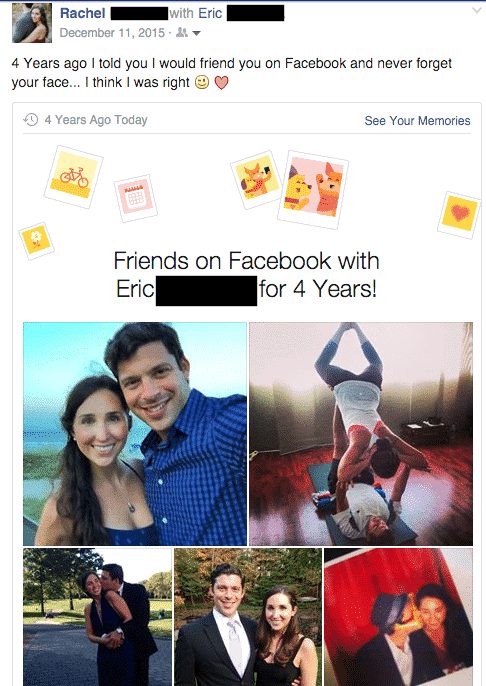 on 1/1/12, I was eating brunch with my mom, when a waiter walked by our table and it was HIM (*okay, I know it may seem like I stalked out where he worked by now, but this was actually a coincidence, I totally thought he worked at the restaurant across the street*). This time he totally blew me off. I was so pissed! “How could he??” I thought! Until that night… when he Facebook chatted me, “So how’d you like the restaurant?”. We ended up talking for HOURS, I am talking high school AIM style. When he finally sort of asked me out… (I hate when people do that… like, make plans if you want to make plans, don't get all noncommittal and weird if you don't).  So I called him on it: 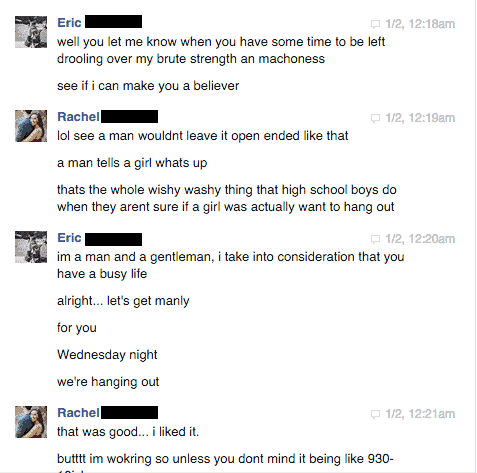 The above is exactly why this site has disclaimers to all my typos!

We made plans for a date, and then he re-scheduled… 3 times. Now most people would be freaking out about this, but I was thrilled. You see, I had (have?) this rule:

Don’t start a relationship between November through February.

Why?  Because most people are getting together for the wrong reasons (*not wanting to be lonely during the holidays*), and things just (typically) don’t go well. Each time he rescheduled we were getting closer and closer to a “no pressure” Valentine’s day.

The entire month of January felt like I was in high school again… spending hours on Facebook chatting the night away with butterflies in my stomach. I was on the verge of busting out my Lisa Frank notebook and gels pens to start writing his name in bubble letters with hearts when (I decided) the universe was sending me a sign: his roommate asked me to hang out, so I agreed, hoping it would be a chance to see him. I went over to their place after the gym and before class one day. Shortly before I had to leave for class, he came home and his roommate left to take care of something, so I decided class was cancelled and I was hanging out.

We ended up spending six or seven hours together that evening. We watched a movie, went to dinner, and then saw my childhood friend (country rockstar) Brooke Eden perform.

He had a work trip the next few days and wouldn’t be back until Valentine’s day, and boy was I happy! We would see each other again on 2/15 and I was perfectly content knowing we had made it out of the holiday mayhem, unscathed.

We pretty much have been inseparable ever since, and are getting married this year ?.

Today, this level of stalking and patience is known as “pulling a Rachel” and I am blessed to get text messages like this from friends:

UPDATE: These who my friend is texting me about in this screenshot is now her fiance 3 years later!!

PSA: For all your stalking needs, call me!

Want to read about our engagement story? Click here

How He Asked: A Millennial Engagement Story

5 Ways My Wedding Was Different Than I Imagined

9 Fears About Pregnancy [+ Why It’s Okay]