Monday Mantra: Stay In Your Own Lane

We've all heard it before; eyes on your own paper, hater blockers on, stay in your own lane. There's a reason this cliche has been said over and over and in a million different ways for decades. It's because it's helpful advice! But just because something is helpful advice, doesn't mean we always listen.

If I'm being completely honest, in the past I always kind of struggled with this concept. Whether it was getting caught up in gossip, meddling in other people's lives, or in work… I had a tendency to drift into everybody else's lane so to speak. I think we've all been guilty of getting into other people's business a time or too socially. At least I definitely was prone to it in my younger years – but in the past I struggled with it professionally.

You see, in true confused millennial fashion, I've never really known what to do with my life. This next part may sound boastful, but if you caught episode 12 of the podcast with Human Design expert Jenna Zoe, you know it's just a truth for manifesting generators: I quickly master things in life. Seriously, give me an afternoon and I can generally teach myself anything. It's led to me being really good at a lot of things where no clear path has ever appeared in front of me. While that might sound great to some people, it has it's down side too.

When you can quickly master things, you become bored just as quickly. My life has been a series of half started projects, redirects, and shifts. I remember even crying around the anniversary of my second year blogging that I was doomed to want to change career paths every few years. I hadn't been able to stick with anything longer than that in my life and was starting to feel the *itch* to switch things up back then. Enter human design, showing me that all of this is just a character trait and totally normal… you'll hear my relief in episode 12 with Jenna Zoe!

Anyway, since I'm a quick study, I've generally taught myself how to do things by looking at what others do then just copying. I'm a master at reverse engineering. That works for a lot of things… you know like how to clean your washer and dryer, how to refinish a brick fireplace, how to style an outfit, and the like.

However, when you try to use somebody else's roadmap for your career, you're bound to lose.

And that's what this is all about. Staying in your own lane…with your career.

When I left the counseling world, a lot happened, the short version is that I wrote out a 200 page life skills curriculum that I proceeded to teach in a workshop/group therapy type of setting for local counseling centers and halfway houses, as well as work with twenty somethings one on one. I did this for about a year, when I grew bored and realized it wasn't really a scalable business model. I'd always need to exchange time for money and I knew someday I'd want kids and more of a passive revenue stream.

So I began to look into moving things online. At that point, I'd primarily received the most interest in three areas: finance, careers, and business consulting. I discovered a career and business coach to millennials and felt inspired. Let's call her Brooke for the sake of this story. We kind of had a similar look and vibe; I knew if she could do it, so could I. I reached out to her, but she was booked for the next year or so and she connected me with another coach she had personally trained and was also a career and business coach to millennials.

I completed the phone consultation with this person, and didn't feel great about it at all. There were a million red flags to not go forward, but on paper, she checked everything off. It also felt like a weird MLM, like if I could get in their pipeline of training one another I'd be able to pick up their overflow of clients and making bank in no time! They both had clearly mastered the market I was going after.

There was clearly something going on between my coach and the woman who had connected us. I got odd emails and text messages that felt like I was the middle person in their almost high school like drama. When I was heading out to their area, I tried to get together with each of them just to network and build a deeper relationship. However Brooke slapped me with a response saying she doesn't “do coffee” and that I could book a session which was $1,200 for the hour if I'd like. WTF?!

At this point, I was straight up irate. I felt like I had been lied too (I'd been reassured during my consultation that they weren't affiliated, yet when I paid my coach it was processed by Brooke's company which seemed odd), then I had been pulled into their drama and set up to either tattle on my coach to Brooke or lie on her behalf, and now I'm being asked to pay $1,200 just to network with somebody? PSSSHHHT!

Swerving fully into her lane…

I got back from my trip and was answering media requests, which are basically when writer's for various media outlets ask me to submit a quote for an article they are working on, when I verbatim copied something from Brooke. Honestly, I don't know why I did it. I told myself I was “just tired” and that “typically the writer's paraphrase and never copy it exactly.” But the truth was, I think I was feeling so hostile towards this woman, that I just wanted to get back at her in some way, even if it meant cutting off my nose to spite my face.

Within 20 minutes of the article going live the next day, I got an email from Brooke, saying she had CC'ed her lawyer with a list of similarities between our brands. On the one hand, I was pissed, I mean she had trained my coach, who trained me and we all were doing the exact same thing. All of our coaching packages were the same. All of the skills we were teaching were the same and you can't copyright the idea that a career coaching package is going to teach resume and interview skills. Nor can you sue if someone transforms your work. You can really only sue if the copy is just that, a copy.

On the other hand, I knew I had definitely messed up on that particular article. I took full responsibility for that. I also knew, that the article was only live for 20 minutes and I immediately asked him to take it down, so it didn't cost her in any sort of damages. She insinuated legal action, but the funniest thing was, I hadn't had a single client after months of working with this other coach. The entire purpose of taking legal action on something like this is to receive financial compensation and show the court how much money you lost due to the copy. But I hadn't made a penny.

The lightbulb and finally getting in my own lane…

I've told this next part of the story many times before, so lucky you guys finally got to hear the true backstory of TCM coming to life… After getting Brooke's email about CC'ing her lawyer, I turned to my husband, hysterically crying, and said, “I'm just another confused millennial who has no idea what I'm doing with my life.” The lightning bolt hit, I grabbed my laptop, and purchased theconfusedmillennial.com – You also know the condensed backstory now to the initial posts on TCM like:

Half truths & passive aggressiveness. – Putting Others Down to Elevate Yourself.

Staying in my own lane…

I always felt so much shame around this story. Like it was some secret that needed to be kept because if people found out it'd discredit my own creativity and digital presence. But this story and exchange was the biggest blessing. Up until that point in my career, I kept following everyone else's path. From grad to school to becoming a carbon copy of these other coaches.

Swerving fully into somebody else's lane, and realizing I had nothing to show for it, woke me up to my own power and uniqueness. Within two months of launching TCM I hit 20,000 pageviews. In a year, I surpassed my 9-5 salary. In 3 years, I generated six figures. I've been supporting my family on my income since getting pregnant and I do it all by keeping my eyes on my own lane. 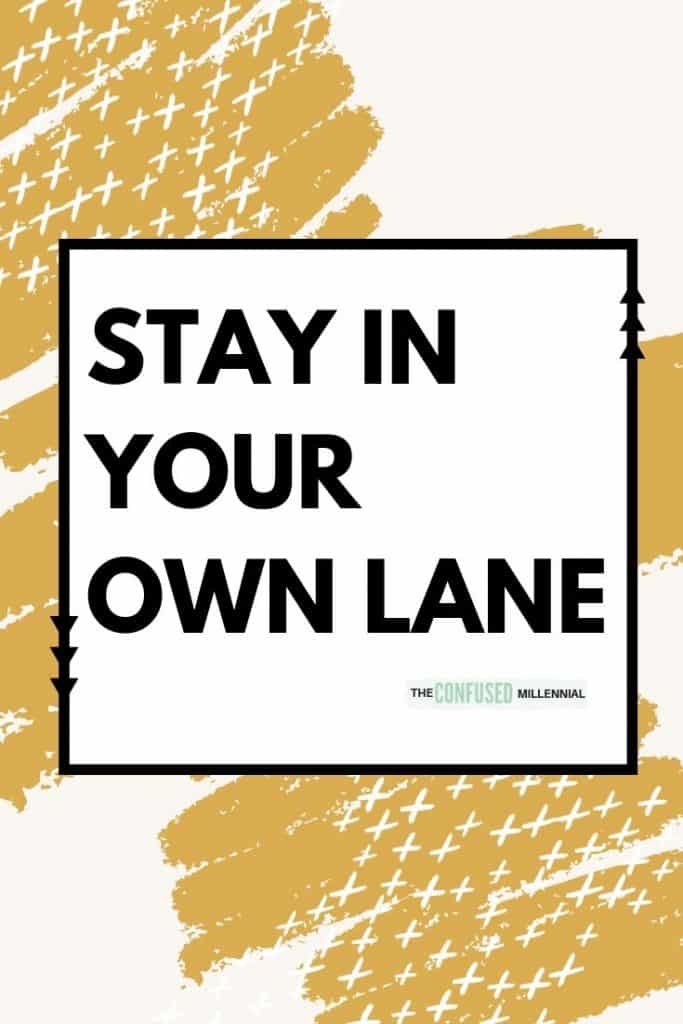 I always get asked, how do you stand out in a saturated market. There are so many bloggers and I seem to have “made it” compared to many who have been at it farrr longer than me. Personally, I think it's because of this experience. It led me to just do what feels right and true to myself while ignoring what everyone else is doing.

Over the years, I've had my blog consulting clients come to me upset that people are copying them, I've had people straight up copy me, and I always feel a calmness over those situations because of this experience. I know, as long as you are trying to be a water down version of somebody else, you will never get the traction you seek. Over the years so many versions of TCM have popped up on the internet, and you know what they all have in common? In a year or less the person abandons their website or they do some massive pivot to copy someone else.

That's not to say…

No that's not to say if someone copies you verbatim and it's stealing traffic or money from you you shouldn't intervene. If you are losing those things you should absolutely send a cease and desist or DMCA or whatever; however it is to say, don't sweat the small stuff. It's not worth your time or energy.

And if you've been struggling to grow in your career, to find joy in what you do daily, look around and take notice of where you are comparing and copying others. In business, whenever you hear a company say, “we are trying to be the Uber of (fill in the blank)” my guess is always that they will fail. Uber is Uber. You are you. So act like it. Own your unique gifts, and stay in your lane because nobody does you better than you.