This week’s movie: Florence Foster Jenkins. Meryl Streep stars in this film, based on a true story, as a New York Socialite dreaming of becoming an Opera Singer.

I can't evennnnn write this section because #NoSpoilers —- but I'm still recovering from Nashville last night and I have SO many questions.

My anxiety has been through the rough these last week or so… I have been having nightmares, not sleeping, and generally feel like I am on the verge of a panic attack. I am not going to go into a bunch of detail on the blog today (because I am literally writing this Friday morning I've been such a mess) — but if you're signed up for my newsletter you are in for a little heart to heart this Sunday.

AKA the moment we've all been waiting for — once we realize Corrine wasn't getting kicked off at Week 5:

Literally y'all I become more and more obsessed with this girl every week! She is so stinkin' cute I can't even. Plus their chemistry is off the charts

Raven shows Nick around Hoxie (WTF IS THIS PLACE? Maybe Alexis was right, and Raven is an alien…), where they do fun things like mudding and scaling grain bins. As they are about to scale the grain bin, the PoPo show up…

Nick: Uh, no – because I've been on national television 4 times – don't you know who I am?

Raven: BAHAHA THAT'S MY BROTHER! (referring to the police, not Nick — although that would've made for a fun twist…)

They head to meet her parents and immediately are told her father is cancer free and I immediately start crying. #bestmomentoftheseason

Maybe it's the fact that she said she would walk herself down the aisle if her dad wasn't with us  – or just her dark sense of humor but I basically feel like she's the Kentucky Fried version of me.

I really didn't expect to love her family as much as I did, but like I really loved them and think Nick and her should end up together.

She starts the date by taking Nick to church!

Despite the awkward face he's making in the GIF above, he seemed to really enjoy church.

Next, they met Rachel's family (minus her father, the federal judge, which I can totes understand. I wonder if he will make an appearance on her season, though…)

Her family is exactly what I expected. Fun, smart, loving, and basically amazing.

Older sister to Nick: Why because you look like us? 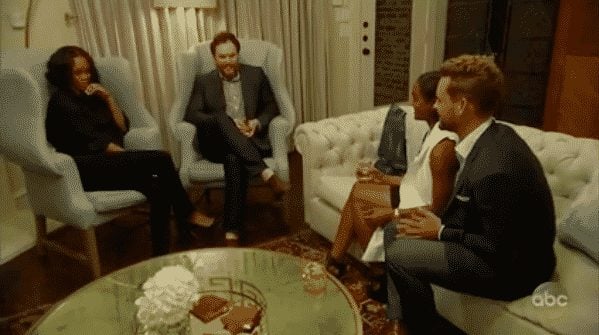 No joke – I started laughing so hard I had to pause. This entire scene was pure gold, and that brother in law is basically Ron Burgundy.  Judd Apatow – get this guy a cameo!

Rachel's little sister: Nick, do you know what that is?

He then proceeded to identify each food on the plate out load: Okra, Mac and Cheese… etc.

I think the conversations had about interracial relationships during this date were so important for America to see. Too often I find myself in conversation with white people who think racism in our country is gone since we had a black president, but that simply isn't the case. Many people in our country have become more progressive thinkers, but Rachel's family is still in Texas and if you didn't see Chelsea Handler's Netflix episode, “Chelsea Does Racism” then you are missing out on an important reality check.

Nick handle's it well, I think it's obvious he and Rachel have had more difficult conversations (unlike him and Vanessa who haven't even talked about life after the Bachelor) – which leads to me the question that has us all scratching our heads: WHAT HAPPENS?!? Seriously, she seems like the clear front-runner, things couldn't have gone better with her family, so why does he let her go and when?!? It's driving me crazy!

Corrine took Nick shopping! Each store they went into Corrine proved she is literally the badest betch around by being on a first name basis with all the sales people. She shared her shopping hacks with us

She played dress up with Nick

and spent more than most Americans make in a month on his outfit. Maybe it's because I live an hour north of Corrine and a half hour south of Donald Trump's Palm Beach home – but people actually do this where I live. Like this is NOT unique to Corrine… so unlike the rest of America I wasn't really surprised, and instead just want to befriend her so she can show me the finer things in life ? #adoptmeCorn!

Corrine ended their shopping adventure with lunch and telling Nick she loves him!

Then we went to meet the parents and Raquel!

They are all as amazing as her and basically, need their own Bravo spinoff show.

Corrine's Dad: So are you okay if Corrine is the bread winner?

Nick: WTF I've never felt like less of a man than today…

Vanessa takes Nick to the school she teaches at.

Meeting Vanessa's family went horribly, which leads me to believe she is either next one home or final 2… Her sister, mother, and father all seemed displeased and distrustful about her relationship with Nick.

Nick to dad: Can I have your blessing to marry Vanessa?

Dad: I just can't give you my blessing

Dad: Did you ask the other dad's you've met this week

Dad to Vanessa: He asked me and all the other dad's this week for permission to marry our daughters.

Vanessa: WTF, he's only supposed to like me, and I thought he was only keeping the other girls because he was contractually obligated!  ?

The episode basically ends with everyone at some fancy Brooklyn Hotel – being all cryptic about being in love, happy, and terrified. Then Andi shows up in the creepiest way everrrr and the episode ends.

Looking for something to binge watch this weekend? Grab TCM's checklist of binge worthy current and classic shows!