Some links in this post may be affiliate links. They won't cost you anything, but if you click and purchase from them, I could make a little coin. Thanks for supporting TCM.

In case you're new to TCM, each Friday I share my latest obsessions and a Bachelor recap! Hope you enjoy and drop me a comment with what I should check out next!

Itunes .99 Rental Of The Week:

This week’s movie: The Intervention. Okay, I am SO excited to watch this movie! It's about a marriage intervention, but the cast includes some of my favorites: Jason Ritter, Natasha Lyonne, Alia Shawkat, Cobie Smulders, Ben Schwartz, Clea DuVall, and Melanie Lynskey.

*Side note: if you have Amazon Prime you can watch it for free now.

Last week I think the only movie I watched was The Lobster starring Colin Farrell and Rachel Weisz. By far one of the the strangest movies I've watched recently, but oddly I liked it. The movie follows a recently single man to The Hotel, where all single people in The City must go for 45 days to find a mate. If you don't find a mate you get turned into an animal of your choice. A group of people have escaped the Hotel and are known as The Loners who live in The Woods and the people in The Hotel hunt them; like I said, it's a weird movie.

Well really, every week is Ellen week around here, it's never a bad decision.
In fact, when I was debating whether or not to go back to a 9-5 or start my own business, E asked me to write out all the characteristics of my dream job and the #1 thing was being able to watch Ellen every day. So I wanted to share this heart melting moment with you:

And for all you Bachelor fans out there, I think you will be happy to catch this segment of Chris Harrison on Ellen:

This week's trainwreck episode starts with all the girls finding out about Liz and heading straight into the rose ceremony.

I honestly don't understand the freakout by some of the women. Like, I get the shock and awe factor and having some questions… but we all know Nick is a 36, very sexually active, man. Everyone has a past, and his has been blasted to 20 million+ people these last few years… so other than getting all the women on the same page, I don't think it needed to be an interrogation like some of the girls did…

“I wanted to have a conversation with you about it, because it's very eerily similar to Andi and Kaitlyn…”

Like, say what now? You've known each other for 3 days and you think this calling him out is the way to build a relationship? She clearly went home that night.

But thennnn you have Corrine's naked bootay who is only upset because someone (who is no longer there) had sex with him before she had her chance. #totesnormal

So, clearly, she strips off her evening gown and puts on a trench coat… then proceeds to practice taking said trench coat off repeatedly. I can't even make this ish up!

She drags Nick onto the driveway a magic carpet with some Reddi Wip (see gif below if you didn't get that ?). I am not totally sure what the “plan” she keeps referring to was here. Did she think he was going to bang her on the driveway for everyone to see? How many times did you want him to lick whipped cream off your bosom to reach your goal?

Thankfully Nick stops these shenanigans from advancing any further and when he spots Jasmine he quickly goes off with her and leaves Corrine and her Reddi Wip.

Which leads to Corrine going upstairs and having a literal breakdown people! Seriously, this was SO sad if you really think about it. Essentially she thinks him stopping her from making a fool of herself, showing her some respect and trying to caution her about making enemies is “degrading” – like having sex on camera in front of the other women on a driveway wouldn't be degrading? WTH?

She proceeds to cry that she wants to go home (which I think all of America would be relieved by at this point) and cries herself to sleep, clutching that poor little roses, straight through the rose ceremony she skipped out on. #SMH

There seems to be a great debate about whether or not Nick should've stopped the rose ceremony to drag her out of bed and make her stand with all the other women. A lot of people are saying he should've… but I totally disagree. I think if he stopped the rose ceremony to get her, it would've only validated her behavior by giving her more attention and it would've kept all the ladies up and waiting longer on her. I think the way he handled it was as respectful to the other ladies as he could've.

Finally, the rose ceremony happens and once again, Alexis proves she is A BAMF

Women sent home:
– Hailey. Daniel's Canadian Homegirl. I'm a little sad about this one, I had high hopes for her… also kudos to Nick for sending a girl home who was basically only wearing a bra.
– Lacey. I didn't really care for her but she had no filter from the little we saw of her and made for good TV.
– Some other blonde went home who was clearly a little too conservative and Southern Bell for him.

Moral of the story: If you're blonde (except Corrine) you are probably going home.

FFWD to the next morning when Chris Harrison enters with probably the best guests ever in tow: THE BACKSTREET BOYS?!?

Where are Jared and Ashley I.?? They would've TOTALLY FREAKED OUT… and probably made this episode more tolerable.

I don't know why but I actually screamed when AJ walked in. And totally felt jealous of them all when they sang “I Want It That Way” before heading out.

Seriously, how much does the group date split suck this week? One group gets to hang with BSB and the other group runs track & field. #suckstosuck

The BSB group date heads out and does some “planned dancing” (aka choreographed dancing to the rest of the world) with BSB to prep for the show tonight.

The girls then get to dance on stage with BSB and BSB chooses Danielle L. as the woman to have a one-on-one dance with Nick while they serenade them.

Can we talk about how awkward the one-on-one dance was? E and I have had to hold each other like that for a really long time during photo shoots and you literally don't know what to do other than make out after a while. It get's awkward. They handled it like champs though and got into it.

Anyway, Corrine has her panties in a bunch (or maybe just her leggings, since she probably isn't wearing underwear knowing her) that she didn't get to stand out with him. So immediately during the evening portion of the date she steals him for a makeout session. Then proceeds to fall asleep on a couch totally isolating herself from the rest of the girls…

Until she wakes up and proceeds to tell the girls about Darota her nanny. Who makes her cheese pasta (aka mac and cheese to the rest of us) and lemon salad. Where can I sign up for a nanny?… I honestly don't know how much longer she is going to last.

Danielle L. obvi gets the rose for this date.
Who else is super excited for her to launch her blog and start hawking beauty products at us on the ‘gram?

Next up we have the one-on-one date of the week, Vanessa.

TBH, I didn't get what everyone saw in her the last couple of weeks. I mean people were freaking out with how in love they are with her and how she is totally going to be in the top four… but after their date I totally see it. Their date was literally the cutest and sweetest of anything that Nick has ever done on these dumb shows.

I mean when he cuddled next to her and kissed her after she puked? How sweet was that?

And then when he cried at “dinner” melting my heart here!She 100% brings out the best version of him.

The second group date of the episode was the snooze fest track and field date. Which we can all agree is the stupidest date… Nothing screams romance like hard physical activity followed by a hot tub sesh on a track on a hot LA day, while all your other girlfriends watch? #JK

The girls competed in a series of Nick themed track and field events. The final event was a sprint between Rachel, Astrid, and Alexis. The girls needed to sprint, to an engagement ring, grab it and sprint to Nick in the hot tub. Rachel had a serious lead, but when she went to grab the engagement ring she knocked it off and onto the ground, so she had to turn around and run back to the ring on the ground, but proceeded to step on and shatter into a bunch of pieces. Astrid was so far back that she easily bent down and picked up one of the pieces and ran to Nick.

The whole situation was infuriating. Rachel should have had the time. I want to see more of them.

Then this girl Dominique has a meltdown during the second part of the date because she thinks Nick is ignoring her. He agrees they have no connection and sent her home in the middle of the date. Good for him, why drag it out if he knows it isn't there?

To close out the date, Rachel, being the clear front-runner of the day, gets the rose.

Nick decides to skip the cocktail party this week and has a pool party with the girls. Things immediately get awkward when Corrine steals him to go in her bounce house. No that's not a euphemism for some part of her body, she actually had the producers fetch and put up a bounce house. I guess she figured she needed a better “plan” since her whipped cream trench coat failed.

The two don't realize anyone can see them so Nick is basically dry humping her for all the woman in the house to see.

Seriously, when is he going to stop with the brain dead decisions?

All the girls are pissed, but then… as if I couldn't love Vanessa anymore, she goes AT HIM. Like no non-sense don't BS me and waste my time #realtalk…

“I’m not judging Corinne, I’m judging your actions. Are you looking for a wife or are you just looking for someone to fuck around with?”

and then the episodes end. STOPPP doing these stupid cliffhangers to us!!

If you just scrolled by that super long recap and prefer to watch, Jared's recap sums up my thoughts perfectly:

Oreo thins! They are a thinner cookie and cream layer and seriously delicious. 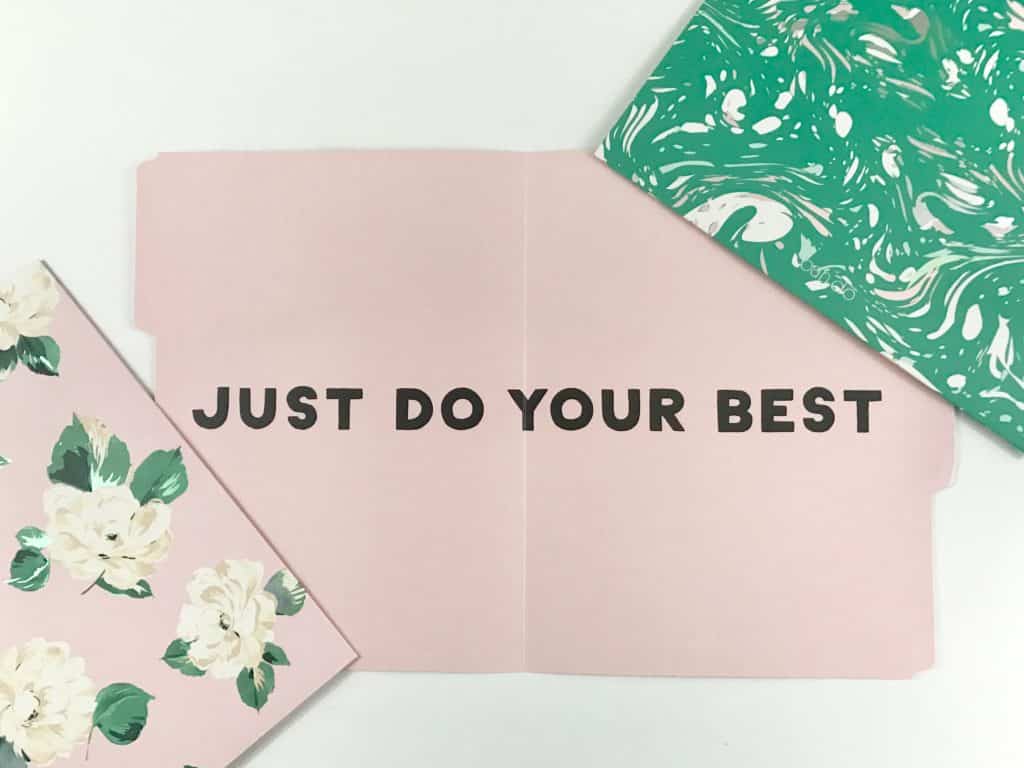 Ban.do Folders: They are so pretty (and encouraging!) I just stare at them sometimes haha! But seriously, they are a total game changer in organizing my desk.
Matching Flower Notebook & Matching Leaf Notebook

And that's it for this week! If you are looking for some more shows to binge-watch this weekend grab my binge-watching checklist which includes current and classic shows!