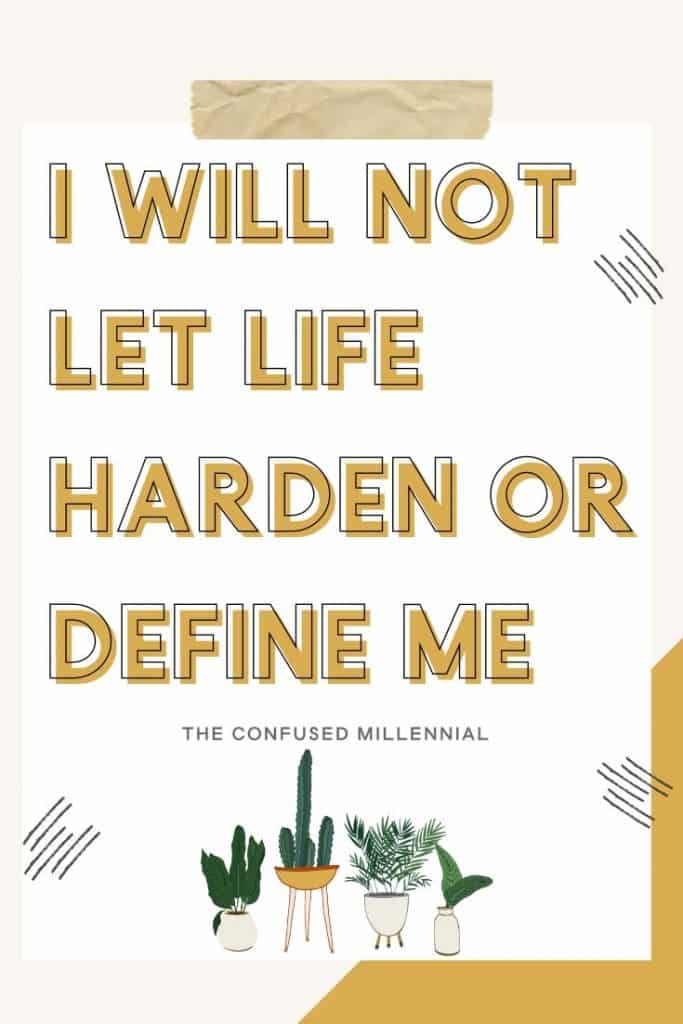 I’m tired. Like really really really tired. Like tired in away I’ve never been before. And it’s not because I’ve become a mom – which obviously does play a role in it. But it’s like becoming a mom has forced me to slow down in a way I never have before. I shared a bit of this in my 2019 year in review post… but today I'm diving deeper. The first week of 2020 was absolutely sh*t. Excuse my french, but there's no other way to say it. I'm grateful for it though because I feel like I'm finally waking back up to myself.

While I was pregnant I constantly focused on myself. My only commitment was to my internal peace and creating the best environment for my daughter to grow. Since having her, I’ve struggled with keeping that same peace. I’ve let people and situations into my life that I wouldn’t have while I was pregnant. But here's the thing: I want to let them in.

I don’t want life to harden me like it has so many of the “adults” around me. So the first Monday Mantra of 2020 is:

I will not let life harden me or define me.

Not into reading? You can listen to this episode here:

It's inspired by this quote I saw the other day, “not impressed by people who’ve allowed life to harden them. What’s really impressive are those who’ve been through a lot, fight to process it in healthy ways, and still present compassion and vulnerability to others.”

That hit home for me.

I think the biggest thing that’s been getting clearer over the last few years is accepting who I am. Like truly accepting it.

Throughout my life, literally every single negative stereotype has been said about me. I used to believe them all, and take them on as my truth which led to a lot o f self loathing, depression, and anxiety. What I’ve realized is that people are saying those things to make themselves feel better. I know that seems pretty obvious, but to actually take that in, integrating it into my heart and beliefs about myself has been a huge challenge for me in the past. I think you'll see why in this post.

I've struggled with appearing like IDGAF to people, when in reality, I care so much and so deeply. I come off as not a people pleaser, when in reality, I've been trying to please people my whole life. I'm just different – and I'm learning to accept that.

Honestly, I don't even know if this is making any sense, so let's dive into a few examples of the negative things I used to let define me and how I'm reframing it:

“Don’t be a flake! No one likes a flakey person”

Well it turns out that my “flakiness” is a gift and not some negative trait. Jenna Zoe brought this to light for me in this podcast episode. It turns out that I’m literally hard wired to change my mind a lot. And while that may not make sense to everyone around me, things work out better for everyone when I do what feels right… even if that means disappointing and upsetting people because it comes off as flakey in the moment.

What they see as flakey, I now see as loyalty to myself and honoring myself. The question then needs to become, why is “flakey” considered bad? And it’s because we put expectations onto other people. Expectations lead to control and codependency and disappointments.

It reminds me of another quote I recently saw from my friend Layla, “what even is perception if not a tool to vibrational co-create?” BOOM. I’ll go into that more in another post though.

I want to pause real quick. 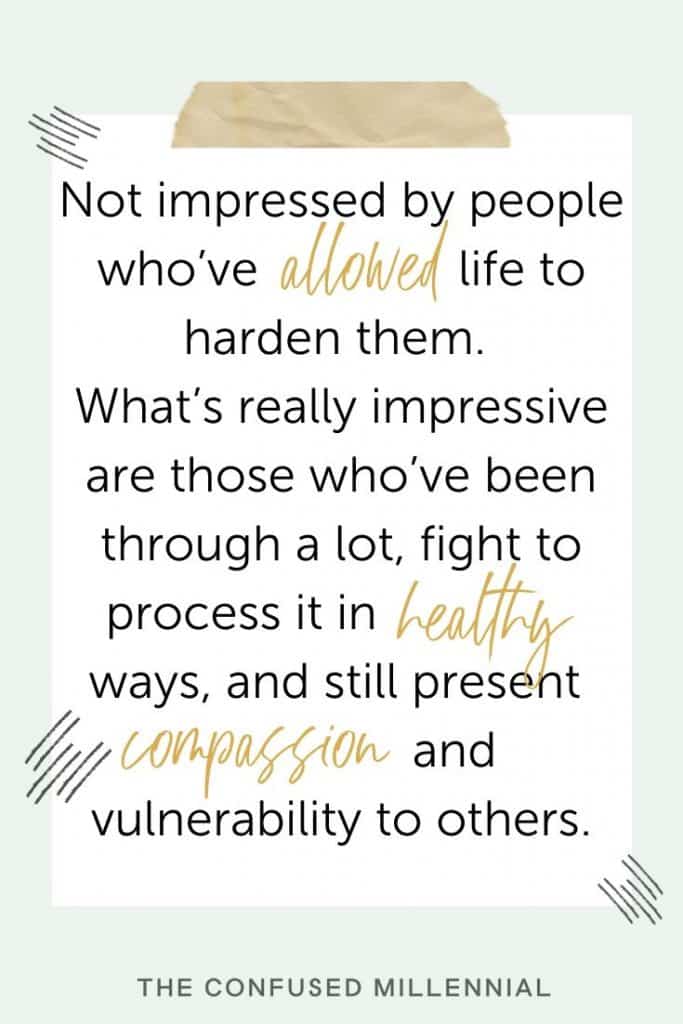 You see, I’ve spent my entire life falling on the sword and taking responsibility for other people’s emotions and realities. The amount of strength it’s taking for me to even put these thoughts out into the world right now… well I can’t even put into words.

These are some of the negative labels people have said about me and I let define me for decades. For the first time in my life, I’m offering an alternative perspective to the reality they’ve chosen in making these statements and honoring myself in the process, which leads me to the next thing…

“Well if everyone has a problem with you, then maybe you are the problem and need to look in a mirror.”

…OOF that conditioning has been A LOT to work through… *Cancer sun over here!* Cancers are notoriously programmed to think everyone hates them (it’s the shadow side of the sign, learn more about shadow sides of signs in this podcast episode).

The idea that just because everyone has a problem with someone means that person is in fact the problem is complete bull.

Everyone can have a problem with someone because of groupthink.

Groupthink is a psychological concept when a group of people conform together to make decisions in order to maintain a false sense of peace, when in reality they are discouraging individual responsibility and creating more dysfunction and irrationality.

You know, when everyone goes ahead and jumps on the same bandwagon of disliking someone because it’s easy and bonding over their shared distaste towards someone gives them a false sense of growing closer together.

Often times, the person they are bonding over is simply doing things differently that they just don’t understand. And just because we don’t understand something, doesn’t make it wrong. Just because we feel uncomfortable by what we don’t know, doesn’t make it wrong. People tend to fear what they don’t understand and take fear based actions like spreading negativity, talk sh!t, and doing other harmful things rather than actually acknowledging their discomfort and coping with it in a healthy way. Like remaining neutral and curious, attempting to understand it, or exploring what wound is being triggered in them and working to heal that.

Every judgment cast upon someone else is an aspect you haven’t accepted in yourself yet.

I remember hearing the Eleanor Roosevelt quote, “No one can make you feel inferior without your consent” when I was in the 5th grade and it’s always stuck with me. As I’ve grown older, I’ve replaced “inferior” with a slew of other words. Because the reality is, if you are feeling some type of way in the presence of someone, that’s your responsibility to deal with. I know that’s a big concept for a lot of people to wrap their head around, but it’s true. Afterall, what do you think people really mean when they say:

“You can’t change people, you can only change yourself.” 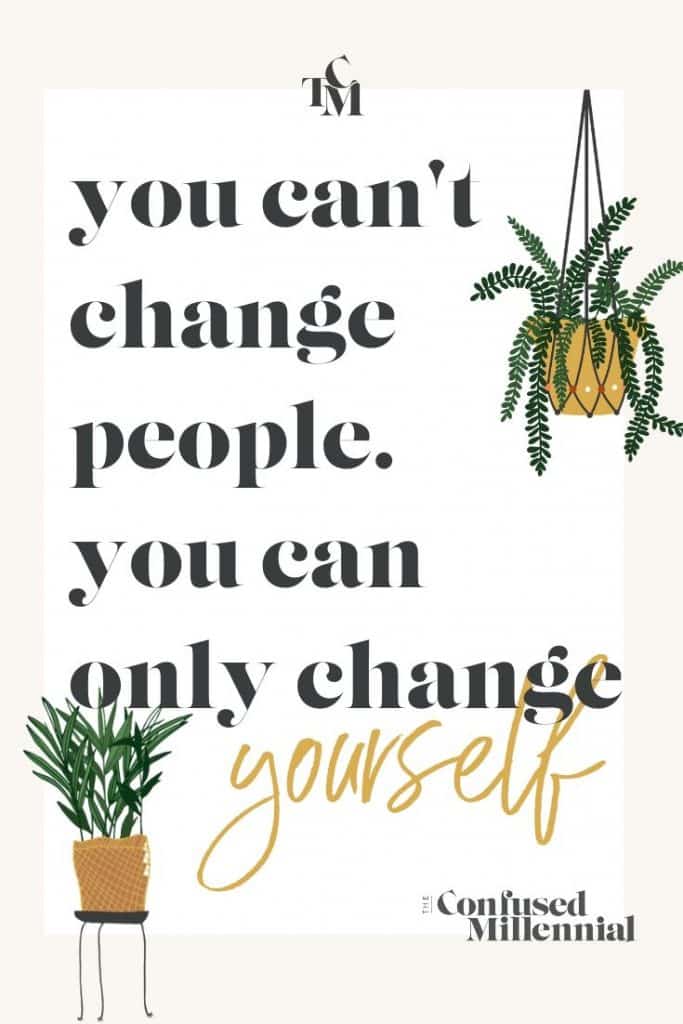 I had gotten so okay with being the “problem” that people scapegoat and dump their issues onto, that I’ve forgotten they aren’t my f*ing issues. I kept making myself smaller and smaller. Censoring myself just so someone would like me, or wouldn’t feel triggered or “sensitive” by my very presence.

But guess what!! If someone feels triggered or sensitive, that’s on them. They are choosing to perceive a reality tapped into that feeling. They are approaching what they don’t understand from a place of fear.

I saw this quote the other day from my friend Barb:

“If you don’t heal what hurt you, you’ll bleed on people who didn’t cut you.” 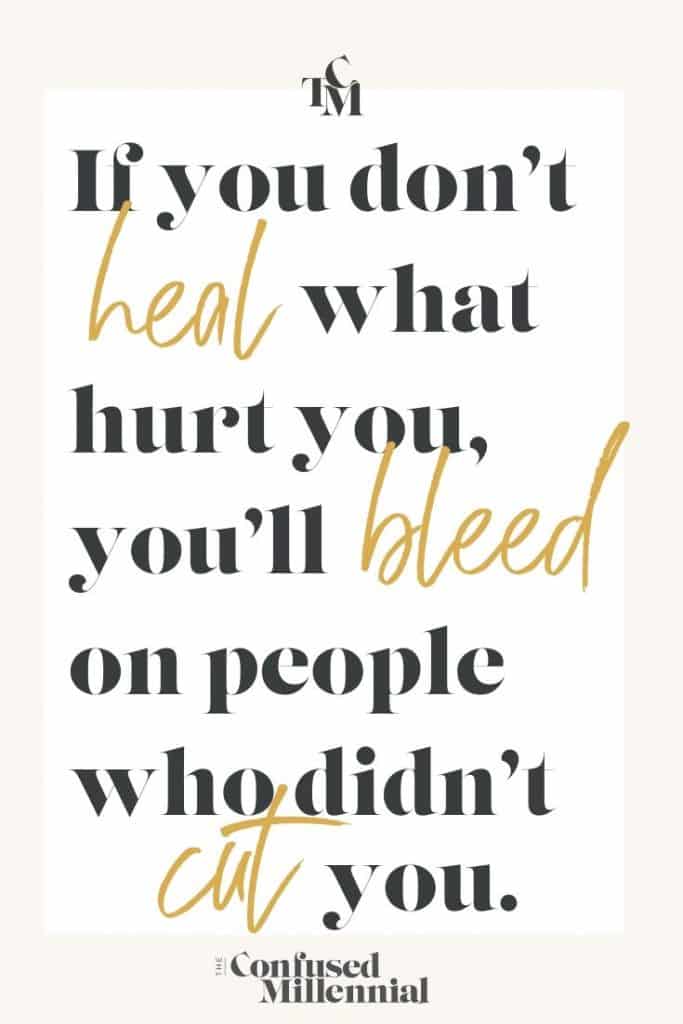 Everyone is bleeding on everyone friends! Yes, sometimes a remark may sound cutting, but if you take it personally and hold a resentment about it, pass a judgement about it, or go vent about it to someone else and attempt to engage in groupthink, you are now part of the cycle and bleeding on the people you’ve just dragged into your reality. That’s how the victim-perpetrator cycle goes.

[RELATED] How To Not Become The Perpetrator | Breaking The Victim Mentality

Furthermore, if you don’t address it in a healthy way (which I’ll get into more in another post, because a healthy way is not saying, “you hurt my feelings when you said X and I need you to apologize” – that’s control and part of the problem where you are bleeding on them for a much deeper cut done by someone else). Or worse, you don’t address it directly and you get passive aggressive or reactionary since you haven’t deal with your stuff and now you’ve reagitate their wound and the cycle goes on and on.

To sit and say you’ve looked at your demons and “you’re good” is as if you're talking about the weather is denial. I’ve been working with a medical intuitive and recently learned wounds can go back LIFETIMES friends! Seriously, we are carrying unknown karmic baggage that may not even have an explanation from this life!! We don’t need knowledge of what the wound is, we don’t need denial of it either. Denial doesn’t make it all go away. It just makes things come out sideways. We do need more self love and honest reflection. We do need to work on taking care of ourselves so we don’t vomit or take others emotionally hostage.

I’ve prioritized feeling nice over feeling safe for most of my life and I didn’t do a very good job at either. So now, I’m going to prioritize feeling safe, because it’s a lot easier to be nice when you feel safe. I hope you do the same.