What comes inside KiwiCo's Panda Crate “Look With Me” for 18 to 24 month olds? I'm sharing what parents can expect from the STEM subscription toy delivery service for toddlers in this post! Including my initial thoughts, my daughter's impressions, whether or not I think it's worth it, and what it would cost to source these items individually from Amazon. Plus, how KiwiCo has UPDATED this Panda Crate from 2020 to 2021!

Watch KiwiCo Panda Crate “Look With Me” Review On Youtube: 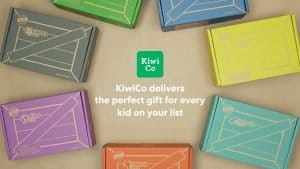 KiwiCo is a STEM based toy/activity company for 0 month to 111 years old! They have several lines of “crates” targeting the various age ranges. Their Panda Crate is specifically for 0-24 month olds whom they partnered with the experts at Seattle Children's Hospital to develop and bring developmentally appropriate, research back toys to your door.

The older KiwiCo crate lines focus more on activities, but Panda Crate really focuses on toys that can be used for toddler activities. Learn more about KiwiCo in this post or check out their website here!

[RELATED] KiwiCo vs Lovevery [AFTER Sept 2020 UPDATE] Which toy subscription box is better?

What comes inside the KiwiCo Panda Crate “Look With Me” For 18-24 months:

KiwiCo themes the Panda Crate's to focus on a particular skill. For instance, the first Panda Crate we received from them was called “Count With Me” and focused on early quantitative concepts and numbers. The “Solve With Me” Crate comes in the 18-24 month old range of the Panda Crate line, and focuses on on problem solving with puzzles and identifying shapes and solving puzzles. This crate focuses on visual tracking.

Inside the “Look With Me” Panda Crate from KiwiCo (2021 Update):

All of KiwiCo's Panda Crates also come with a link to a page on their website with more book recommendations and other tips.

For working on the “shapes” concept these are the books they recommend “beyond the crate:”

My initial thoughts upon opening this Panda Crate:

When I first unboxed the “Look With Me” Panda Crate from KiwiCo I was actually excited for the first time! But then felt a little skeptical (per usual). I kept an open mind since I'd been so wrong about past Panda Crates though…

I was most excited about the wood rainbow and the ramp racer. I've always wanted a wood rainbow, but felt skeptical towards KiwiCo's since it's only 3 pieces, compared to ones on Amazon that are 12 pieces. The other thing I noticed was the smallest piece was solid wood – not open like the ones on Amazon.

Either way, I knew my skepticism has been proven wrong with each Panda Crate – so I kept an open mind and brought the toys to my daughter…

Mom + Toddler's Impressions of the “Look With Me” Crate: Is it REALLY worth it?

My daughter saw the box and got SO excited.

She immediately gravitated towards the Butterfly drop… which was an item I thought was kind of silly/pointless. I mean, don't get me wrong, I remember enjoying items like that as a kid… but other than dropping the butterfly down, what else can you do with it?

So while she played with that, I rolled the ball down the ramp. She then joined me for a few minutes but went back to the butterfly drop.

I got bored rolling the ball down the ramp after a few minutes, so I decided to take the wood rainbow and set up a little track. Afterwards, I realized this is what they suggest doing with the items in the “Beyond the Crate” cards. In setting up my little race track I realized the solid small piece was actually intended to be a “stopper.”

Once I started rolling the ball down the ramp and through the rainbow pieces, my daughter rejoined me and had a total blast. She kept trying to set up the rainbow pieces when they'd topple over. I also attempted to lay them on their sides to create a winding course. Once I started doing that though she went back to her Butterfly drop, ha!

So of course, the item I thought was kind of silly, once again she LOVED.

I think she'll continue to play with the wood rainbow, ramp, and ball for years (like 7 or 8?) since they work well with our wooden block set and encourage open ended play. I think the Butterfly Drop will probably be a toy she plays with on-and-off until about 3 (maybe 3.5 years old?).

The spin-and-slide board is definitely the item she's engaged with the least so far. In retrospect, I think she just preferred the other three toys. She's had her moments with it, but it's never captivated her like the other toys. Personally, I think this will work well as a car toy (since it's all one piece and about the size of an adult male palm) or will work well for baby. I don't see this toy holding her attention/getting a ton of play past 2.5 years old. I'm currently pregnant and think this toy will actually work better for the baby, than for my toddler so I'm hopeful we'll still get some use out of it.

Lastly, the board book in this crate is just okay. This is the first board book from KiwiCo we received that my daughter only asked me to read for like a day. Normally she has me read the book over and over for at least a week. She likes it alright, but doesn't love it. The concept of the book is really to trace the trail the duckling is running away on, so it's definitely a bigger concept to grasp compared to previous books (tracing shapes or numbers). What I mean by that is shapes are always the same. But the visual tracking aspect of following the path in the book changes on each page, making it more of an abstract concept since it changes on each page. For that reason, I think it's a book she'll grow to like more and more, but it's a slow start so far.

How much would it cost to get these items on Amazon instead?

Option 1: Soft busy boards. These are going to typically run you between $15-50 dollars… they are great for car rides or appointments since they are typically the size of a folder and slide easily into a diaper backpack or tote purse. Most have everything connected into one singular piece. And they work a variety of skills typically from buttoning, to tying, to zipping, and more.

Option 2: Wood busy boards. They come in a ton of styles and will typically cost you anywhere from $20-160. They aren't great for car trips or travel since the wood tends to make them heavy. But they are all one piece and work a variety of skills. This is the exact one we have.

With that said, here are the exact one's I'd recommend that are most similar to KiwiCo's (but I think will last longer):

Option 1: $13 – Small (2 in x 2 in and only a half a pound) makes it easy to take on car trips. It has a few sides, including the gears like KiwiCo's and a fun little hourglass for visual tracking.

Option 2: $15 – Spinning gears like KiwiCo's, but also has opportunities for teaching shapes and colors without being too overwhelming. Also small/light enough to travel with. Unlike the previous option though, the pieces can all become loose/go missing.

Honestly though, there are so many busy board options out there at every price range that are far more engaging than KiwiCo's… So just think about what things are important to you when choosing one!

Is KiwiCo's Panda Crate “Look With Me” worth it?

If you were to buy these items individually off Amazon you'd be looking at around $80 – which is twice the cost of this Panda Crate from KiwiCo. So financially it's a good deal.

While I don't think every single item in this Panda Crate was a hit, I think the ones that are worthwhile will last for years, so it balances out for me. Plus I'm pregnant, and the one major “dud” item I think will work great for baby.

Out of all the KiwiCo Panda Crate's we've received so far, I'd say this was the “concept/skill” (visual tracking) I felt the least excited about. Not that it's bad, but it just feels like a filler concept and filler toys. I'm not mad we spent money on it, since I'd always held off on getting a wooden rainbow knowing eventually one would find it way into our home… but if we already had a wooden rainbow I think I may have been more disappointed. Either way, any items that you don't like always make fabulous high quality gifts so I think KiwiCo is worthwhile!

[RELATED] KiwiCo Panda Crate “Solve With Me” for 18-24 months

Lovevery Playkit Subscription Review: Worth It?

Lovevery Block Set Review: Is It Worth It?

Lovevery Montessori Play Shelf Review: Is it worth $400 vs Dupes?!?

The Looker Play Kit for weeks 0-8

The Charmer Play Kit for months 3-4

The Senser Play Kit for months 5-6

The Inspector Play Kit for months 7-8

The Explorer Play Kit for months 9-10

The Thinker Play Kit for months 11-12

Monti Kids Review: Is The Montessori Baby Toy Subscription Worth The Cost?

Monti Kids Level 2 Review: Worth It? for 4 to 6 month old

KiwiCo Panda Crate Review: Count With Me for 13-18 month olds

KiwiCo Panda Crate “Solve With Me” for 18-24 months

KiwiCo’s Panda Crate: “Look With Me” Review: Worth It?

KiwiCo Panda Crate Discover With Me Review: Worth it?