Never meet your heroes. It's a common phrase, but a harsh reality. After a serious reality check, I learned the truth, that many public figures put others down to elevate themselves. Self improvement requires effective and supportive communication. Don't be passive aggressive and tell half truths to make yourself look better.

Recently I had an encounter with someone I once looked up to. She was a thought leader in my industry. I was hoping to connect and learn from her (maybe even become friends)! We seemed to have so much in common!). I was hoping to get on her radar and join her network. Only to have the dream shattered when I realized she was full of insecurities, competitive thinking, showmanship, and crap. Nasty traits veiled under the pretenses of “enlightenment” and “compassion.”

[RELATED] Monday Mantra: Stay In Your Own Lane

At the same time this realization hit, so did this article on Business Insider. Stefanie Williams destroyed under paid Talia Jane. When I first read the article, I remember agreeing with several of Stefanie's points. Feeling her passion, I  almost shared it. Something stopped me though. Realizing I never actually read the original article she was referring to by Talia, I decided against spreading such criticism without considering Talia's experience. As a former waitress for 7 years, I realize there is a HUGE difference between waitressing and earning minimum wage. In serving you can make minimum wage, but you can also make $500 in one hour. Supporting yourself on true minimum wage isn't easy. I have a lot of respect and empathy for Talia's struggle.

I am SO glad I waited to share the article because today, this article by Sara popped up.

Sara writes, “Spoiler: kicking a younger sister when she’s down in self-congratulatory snark is neither gracious nor humble.”

Just like Stefanie, this person I once looked up to, used my low point to bolster her own false sense of being “better than” us younger more inexperienced folk. In this person's weekly newsletter she used my weakness, my mistake, my struggle to put herself on a pedestal. Describing herself as if she transcended above it all by being able to identify her emotional plight. However, where was her action to support that awareness? Being aware of your internal dialogue is only half the battle… it's what you do with that awareness that matters! How are you actually the change? You see Stefanie and this person did not actually offer compassion, empathy, or a helping hand.  They both judged and passive-aggressively attacked Talia and myself, only to boost themselves higher with half-baked truths and buzz words.

Words only mean so much – but your actions truly define you and it really does break my heart to pull back the curtain on these things and see the truth.

[RELATED] How To Not Let Life Harden Or Define You

People on twitter always ask me what I'm “confused” about. I usually respond with: “everything and nothing all at the same time” – and it's because of exchanges like these described above.

Nothing is ever what meets the eye, and I guess this week was a friendly reminder from the universe to not believe everything you read on the internet ;-).

NOTE, in an effort to not be full of crap, I want to shine a light on myself and my past:  I've lied, I've cheated, I've stolen, I've been passive aggressive, and made more mistakes than I can count in my life. I've said one thing and done another. I am not perfect, I am not transcended. However, I do try to make an effort that my words align with my emotions and my actions. If it doesn't feel right and I can't support it with action, I usually (96% of the time) won't say it or agree to it; and I certainly WON'T promote it.

Nobody is perfect, my issue is when others go on larger platforms to promote that they are better than instead of taking the opportunity to actually learn the full story and truly help a sista out.

With love, honesty, and respect,

The Greatest Gifts You Can Give Yourself Before Turning 30

Pin this for later: 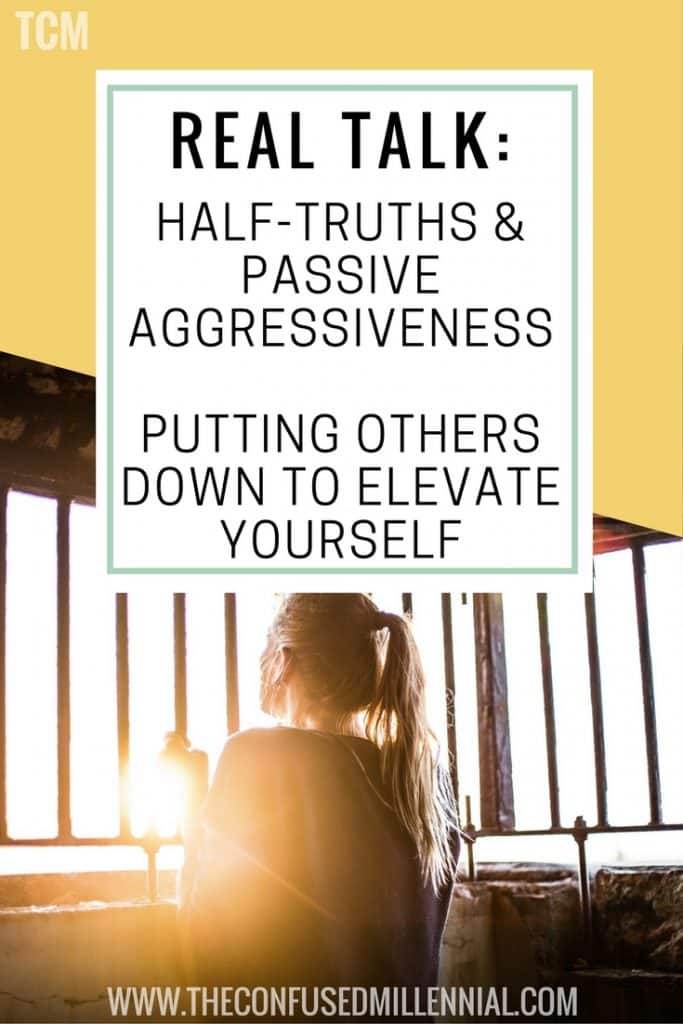 4 thoughts on “Half truths & passive aggressiveness. – Putting Others Down to Elevate Yourself.”